It’s a long drive from Williamsburg VA to Callao, VA and the home of Westmoreland Players, to enjoy some theatre. However, it was worth the long drive to have an enjoyable evening with My Three Angels. 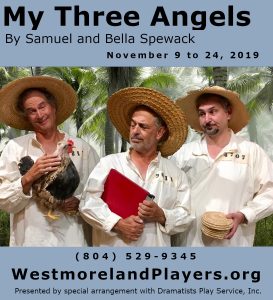 Samuel and Bella Spewack are the playwrights for this 1953 script. The play initially opened on Broadway in March of that year and closed in January 1954 after 344 performances. There have been several adaptations to the big screen, most notable being the 1955 film, We’re No Angels, starring Humphrey Bogart and Peter Ustinov. The couple also won a Tony for writing the book to the Cole Porter musical, Kiss Me Kate.

The play is set in 1910 at the shop and home of the Ducotels, Felix, Emilie and Mary Louise. Their home is located in sweltering French Guiana. The family has a living room in the back of its general store. They have hired three convicts to repair their roof. It may seem unlikely, but the cons believe justice should be served to anyone who perpetrates wrongdoing, It comes as no surprise that they are quick to foil the efforts of of Henri Trochard and Paul from France who’ve set their sights on the Ducotels family business as well as their beautiful daughter, Mary Louise. The Comedy is found in the antics of the convicts as they team to mete out justice. .

My Three Angels is a comedy but there are religious overtones. My observations include Angels looking from above on the innocent and guileless along with the desire to help them in their time of need; the garden of love; mercy to those who believe and judgment to the wicked and then finally happiness to those who can wait with hope.

Director Tommy Neuman has assembled a fine cast for this effort and it's expertly blocked—enhancing the comical nature of the play.

Felix is played by Bruce Lawyer, gives a spirited effort and wades his way through expository text balanced by his interaction with actress Debbie Evans.. It was noticeable that Mr Lawyer does not engage in eye contact with the other actors. If he did then I think the additional gesture would enhance his performance.

Debbie Evans (Emilie) delivered an excellent, nuanced performance. She engaged well with each actor especially with John Pitman. I especially enjoyed her interaction with Pitman’s Jules as she came to understand her affection for him.

Jaime Beazley (Mary Louise) is a very talented young actress. She was very believable in her love of Paul and her youthful exuberance. She has a very bright future and I encourage her to perform more productions at Westmoreland Players and elsewhere.

Joann Long (Mme Parole) had some funny comical moments as she preyed on Felix’s generosity.

Dan Beckhard (Joseph) was superb as a scheming con man. He in many respects is a scene stealer and has excellent comic sensibility.

John Pitman (Jules) was the standout. Jules was a fully fleshed character that first appeared to be a somewhat daffy murderer and then transitioned to a thoughtful family man as he engaged with Emilie.

Michael Snider (Alfred) was the muscle man of the Angel Trio. He has a quiet presence on stage and yet is fully engaged with each actor. His greatest strength as an actor is being present with each moment on stage.

Dave Gutowski (Henri) successfully projected the ominous and villainous Henri Trochard. My recommendation is to dial back the angry shouting. It is possible to appear more ominous with more subtle tones.

Kenny McCartney (Paul) has superb stage presence. He was very effective as the oleaginous, duplicitous Paul and would be suitor of Mary Louise

Christian Fields (Lieutenant) was a joy to watch as the dashing Lieutenant. I hope Westmoreland Players will continue to use his talent for future performances.

Costumes by Marcia Peters and Sandy Burroughs were exemplary. They truly represented the Edwardian period. I especially liked the costumes worn by the women especially Emilie Ducotel. A couple of prop suggestions would be a feather duster for Emilie and perhaps a fan, and a handkerchief for Felix.

Sound design by Nancy Royall successfully enhanced each scene. Doorbells, hammering nails and other sounds were evident and yet were not distracting.

Set design by Bill Armstrong challenge was to represent a tropical Edwardian setting and he definitely rose to the challenge. There was furniture that had a Louis XIV look along with palm branches and bamboo trees. Gas Lamps were mentioned by Mr Neumann and I thought it could have had a better presentation. Gas Lamps flicker and have a susurration sound. The addition of a flickering light circuit and with help from the sound engineer could have made the entire technique happen.

My verdict for My Three Angels is a Thumbs UP for an enjoyable comedy that will tickle your funny bone.

Written by Frank Connelly. Photos by Dianne Saison.Special Thank you to Cindy for assistance with this Review.Westmoreland Players “My Three Angels” by Samuel and Bella Spewack through permissions granted by Dramatist Play Service.