HomeBlogsGarney Johnson's blogPeter and the Starcatcher - Little Theatre of Norfolk 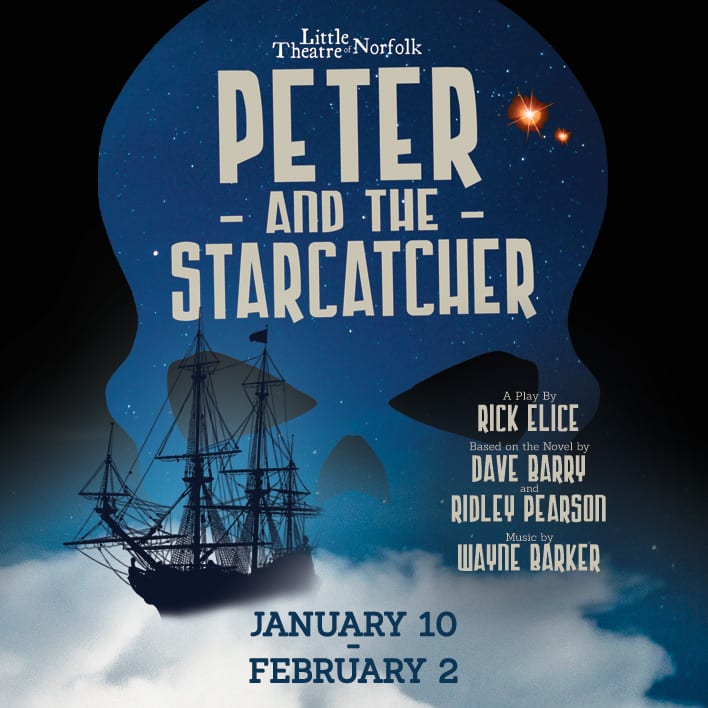 Peter and the Starcatcher
Little Theatre of Norfolk, January 10 - February 2, 2020 Friday and Saturday at 8pm, Sunday at 2:30pm
Click here for more information.

One of the most magical aspects of theater is the ability to capture the imagination of an entire audience of various demographics, and Peter and the Starcatcher is one of the best shows that can accomplish that kind of magic. Adapted by Rick Elice from the novel by Dave Barry and Ridley Pearson, Peter and the Starcatcher is a charming origin story of a certain lost boy trying to evade pirates at sea and on an island full of enchantment.

Peter and the Starcatcher is currently playing at The Little Theatre of Norfolk through February 2 under the direction of Meg Murray. Also serving as costume designer and prop master, Murray shows a knack for creative uses of simplicity (a rubber glove becomes a bird, a length of rope becomes everything from a staircase to the mouth of a crocodile) that helps make this production of Starcatcher a whimsical evening to be enjoyed by audiences of all ages.

The play begins with an ensemble of actors encouraging the audience to use their imagination as they establish a tale of two trunks each leaving on a different ship on the same day. On opening night the speed of which these first lines were delivered was both impressive and daunting, but once the story got going everyone in the theater (both on stage and in the audience) were able to relax and enjoy themselves a little more.

One of these trunks is under the care of Lord Leonard Aster (portrayed by Jeff Johnson with the appropriate British stiffness, allowing for great comic effect when breaking into a looser stance) who places his daughter Molly (Kaiti Edwards) under the care of her governess Mrs. Bumbrake (Marshall Robey) aboard the other ship (called Neverland) for their safety while he fulfills his royal obligations guarding the trunk. It is aboard Neverland that Molly meets a trio of orphans, one of whom eventually becomes our titular Peter.

Ryan Kearns makes an impressive acting debut in the role of Peter, finding the right levels of alternating eagerness and concern as he enlists his orphan companions Prentiss (Connor B. Land) and Ted (Jacie Murray, a standout scene stealer) to help Molly reunite with her father. Miss Edwards, the youngest member of the cast, more than holds her own in a stalwart performance as young Molly.

The arrival of the pirate Black Stache is when Starcatcher really comes alive, with the help of a winning performance by Sean Thompson showing the appropriate flair for theatrics and love of language that makes the character so memorable (it won a Tony Award for Christian Borle ten years ago). Aided by his first mate Smee (Lois Digges, having some of the most fun on stage and being all the more entertaining for it), Black Stache is the kind of antagonist you find yourself cheering for because of his own childlike zeal that makes him a perfect match for Peter; neither of them want to grow up.

Jason Martens emerges as an MVP candidate for this production, responsible for designing and overseeing construction of the impressive set, as well as being a late addition to the acting ensemble in the role of Alf, the crusty sailor enchanted by Molly’s governess. The scenes shared between Martens and Robey are some of the most entertaining and humorous moments of the show. The majority of the cast is also credited as scenic crew, which may have contributed to how well they work together as an ensemble.

Peter and the Starcatcher is at its strongest when the ensemble is enjoying the high energy antics on stage, and luckily there are plenty of such antics. A play with music by Wayne Barker under the music direction of Shelley Cady, there were certain moments on opening night when dialogue was lost under keyboards, particularly when Black Stache has a rhyming tete a tete with the dastardly Captain Slank (a role filled nicely by George Gott with an impressive maritime manner of speech).

The musical number that ends the first act isn’t as strong as the livelier selection that opens the second act, which also showcases the choreography of assistant director Chris Hogan and helps prove that the strength of the show is in the ensemble enjoying the enchantment at the core of the story. Further evidence of this can be found in the scenes during the second act with Keenan DeBurns as the crowd-pleasing Fighting Prawn.

Murray’s costume design is just as cunning as her use of props, enlivening the stage with colors and costuming that helps define the characters. The stage is well lit under the design of Nina Martin, particularly in the first act with some nice isolated moments. And while on the topic of isolated moments, this may be the first time where one of my favorite moments in a show was delivered by stage crew (kudos Lisa Bolen).

With the holiday season coming to a close, and the new year bringing new responsibilities and reasons to adult, it’s refreshing to have the opportunity to escape into a world of make believe. Do yourself and favor and stop growing up for a while with Peter and the Starcatcher