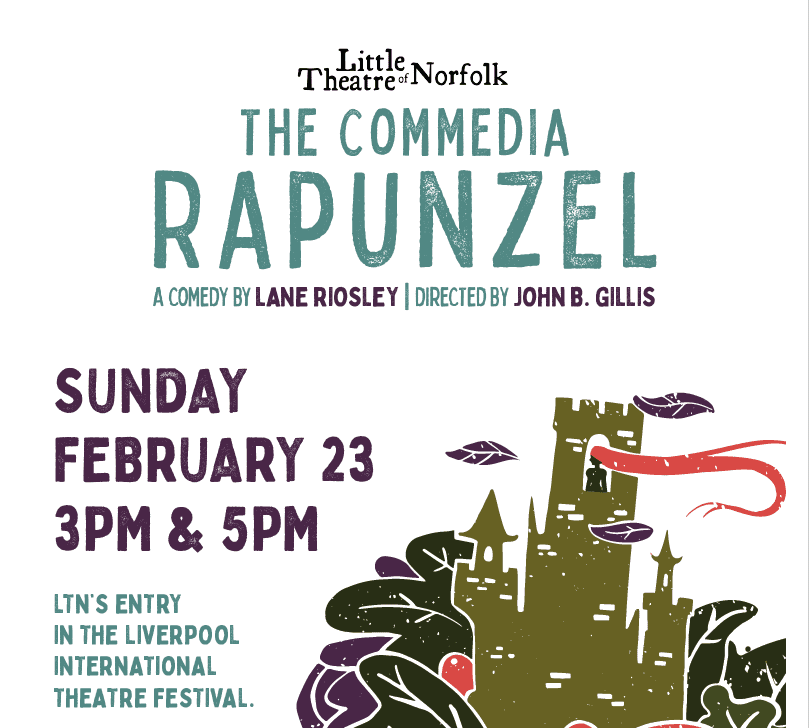 In 1992, a small fishing town in Nova Scotia, Canada launched the Liverpool International Theatre Festival, hoping to attract tourism. Little Theatre of Norfolk will perform there this fall under director John B. Gillis, who lived in Nova Scotia back when the festival first formed.

Gillis took a few moments away from directing and fundraising to tell us about the theatre festival and the show he’s bringing there, The Commedia Rapunzel.

How did you find out about the Liverpool International Theatre Festival?
JG: Liverpool is a small town of approximately 3,000 people located on the south shore of Nova Scotia, Canada. It was founded as a fishing port in 1759. The town grew with the aid of a pulp and paper mill, which eventually closed in 2012. The town has become a popular tourist spot helped by the Astor Theatre providing high-quality shows. To bring in more tourist dollars in 1992, the Liverpool International Theatre Festival was formed and backed to a certain degree by the municipal government with the Astor Theatre as the performing center. I played a very small supporting role in the initial start-up of what was to become a very popular festival featuring many theatrical groups from around the world.

During the time LITF was being developed, my significant other of five years played a major role in the plans and was key to the success of the festival. She was Mrs. Theatre Canada and was well known throughout the land. We often had stars of stage and television, mainly Canadian, drop by our house for dinner or a cocktail or two. Two US personalities I got to work with were the comedian and actor Red Buttons, and Estelle Getty from The Golden Girls. Anyway, my significant other took me along to help with the festival mainly as an assistant. She was the artistic director of the festival for many years, and later on became one of the adjudicators of the performances.

Are you originally from Nova Scotia?
JG: No. I am originally from South Yorkshire in the north of England- born and raised there. The company I was working for transferred me to Denmark, and after my assignment was up, I was sent to Canada. That was back in 1966. I resigned from the company with another pending transfer to God knows where. I liked Canada very much and took up residence there.

How did you get involved with theatre?
JG: My start in theatre came purely by accident. Back in the late ‘80s, my daughter, Jennifer, was taking political science as her university major and theatre as a minor, Her university theatre group was invited to perform in a theatre festival in Sighnaghi, a beautiful town located in the foothills of the Caucasus Mountains, south of Tiblisi in the Republic of Georgia. By a quirk of fate, I was asked to go along with the group as stage manager, even though I had no theatre experience. I jumped at the chance to travel!

That was when I got the theatre bug- stage managing many community theatre group performances in Halifax, Nova Scotia, as well as involvement with the International Amateur Theatre Association. In one IATA sanctioned festival, the 1992 Toyama International Theatre Festival in Toyama, Japan, I won the Best Technician award for lights, sound, and stage management, competing with 23 other countries.

When I moved to the states in 2000, I was invited to stage manage a performance of a theatre group in Elizabeth City, North Carolina. From there, it was just a short hop from stage managing to directing. I had found my niche and would direct plays at every opportunity, focusing my talents on comedy and drama in places like Kansas City; Goldsboro, North Carolina; Smithfield, and Norfolk. The last show I directed at Little Theatre of Norfolk was the very successful drama Red Herring.

What will the LTN troupe experience at the Liverpool International Theatre Festival?
JG: The troupe will experience the adventure of international theatre competition at the highest artistic quality. They will return to the US with a sense of camaraderie and learning which will last a lifetime. The Little Theatre of Norfolk will be met at the Halifax International Airport and transported the 100 mile journey to Liverpool. A welcoming committee will greet them and provide them with guidance to look after their every need. They will be in awe of the friendliness of the community who open their houses to billet the performing groups at no charge.

It is not a huge festival compared to some standards, only eight to ten groups. In the last festival in 2018, theatrical groups came from Nepal, Peru, India, Georgia, USA and of course Canada. There will be periods of learning through performances, critical analysis of each production, colloquies and workshops, and there are awards, ten in all, actually 11 if you count the Recognition of Participating.

What made you choose The Commedia Rapunzel as the show to send?
JG: The festival rules state the performance should be no longer than 50 minutes, classic or modern, and transcend language barriers. Searching the theatrical publicists lists of performances that might meet these conditions, I came across The Commedia Rapunzel, which seemed to fit all the categories requested. It was exactly 50 minutes, it was a classic in a modern setting, and it was very visual to the point that anyone not understanding the language would understand the context of the production and laugh at the antics. With the costs of travel being exorbitant as they are, we needed a small cast with little or no set to transport. Again, The Commedia Rapunzel again fit the bill precisely.

What is commedia dell'arte?
JG: Commedia dell'arte originated in Italy from the 16th to the 18th century. Translated in English, it was formally known as “Italian Comedy” or "Comedy of the profession" where performers, whom I assume were professional actors of their day, performed improvised sketches or scenarios with actors playing the role of some recognizable personality. Some actors wore masks with prominent features- big nose, bulging cheeks- of their targeted victims, so they would not be recognized.

The typical English pantomime, many of which I attended in my younger days, were derived from commedia dell'arte, where women played male roles and vice versa, wearing outlandish costumes and face paint and performing equally outlandish scenarios. And so I bring you The Commedia Rapunzel. It is a comedy loosely based on the fairytale of Rapunzel. Though the play is performed in current times, its actors portray performers of yesteryear with their outlandish characters, their outlandish costumes, and equally outlandish scenarios.

What is your favorite part of the play?
JG: Hmm. I really have to think about this one. The witch who gets knocked off the tower by Rapunzel's falling hair, the fight between the prince and the troll, or the fight with the ogre, or perhaps the invisible knight, or how about the witch monkey? I don't know, but the part where the cast rolls on stage with the cart full of props and costumes, to the part where they all live happily ever after, might cover it - and that's about 50 minutes.

The LTN troupe will perform The Commedia Rapunzel across Hampton Roads as fundraiser for their travel to Canada. What will local audiences experience when they come see the show?
JG: The local audiences will hopefully see the humor the actors are trying to portray by playing different characters, and having quick costume changes with some improv thrown in for good measure. Keep in mind this show was chosen with a multi-national audience in mind. Kids would love it naturally.

The debut performance of LTN’s touring troupe in The Commedia Rapunzel will be Sunday, February 23, at Little Theatre of Norfolk, located at 801 Claremont Avenue in the Chelsea neighborhood of Norfolk. The showtimes are 3pm and 5pm. The show runs approximately 50 minutes. The play is free, so there are no ticket sales. If you like what you see, the troupe will graciously accept donations. The money raised will go towards the troupe’s travel to Canada. The next free performance of The Commedia Rapunzel will be Saturday, March 7 at 3:30pm at LTN, as part of the community engagement programming of the second annual Norfolk Theatre Festival. Little Theatre of Norfolk is a volunteer led, non-profit community theatre, continually operating since 1926.